Cell culture is a valuable yet time-consuming aspect of basic biological research and drug discovery. Whether short- or long-term assays, the maintenance of cells is a frequently recurring process and the workload and possibility for contamination increases as the number of cell lines being used by a laboratory increases. In addition, different scientists frequently use different techniques when maintaining cell lines and these alterations can manifest in subsequent assay variability when using these cells.

Here we demonstrate the automation of all aspects of standard cell culture and plating on a Biomek i7 Automated Workstation (Figure 1). A sterile working environment was maintained with HEPA-filtered fans on the Biomek i7 enclosure and the use of sterile Biomek tips prevented contamination throughout the weeks-long culture process. The ability of the Biomek i-Series instruments to directly access integrated devices such as incubators, plate and tip storage, and various analyzers makes these systems ideal for cell culture and cell-based assays. 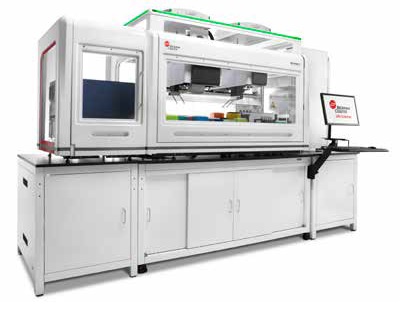 Figure 1. Biomek i7 with HEPA filters and integrated devices.

CHO cells were cultured under adherent conditions in 6-well plates and a Tilting ALP was used to angle the plate to enable the Span-8 probes to completely remove culture media without disturbing the cells. Cells were then trypsinized by incubating on a heated Peltier device, resuspended and counted on an integrated Vi-CELL XR Cell Viability Analyzer. 1 X 106 viable cells were passaged into the next well every three days utilizing the “Split Volumes” option to automatically account for when transfer volumes were greater than the tip capacity. 24 hours after plating, cell confluence was determined on four regions of each well using a SpectraMax i3X Multi-Mode Detection Platform with SpectraMax MiniMax 300 Imaging Cytometer. Figure 2 shows the distribution of cells after passaging manually or on the Biomek i7 Workstation. The lack of cell clumps in the images shows the automated trypsinization was effective and the low CV value illustrates even distribution of cells across the well.

Figure 2. Consistent automated cell passage. Cell confluence (purple) was measured across 12 images in each of 4 regions of the 6-well plate well 24 hours after manual and automated passaging of 1 X 106 cells. Average confluence and CVs across the 4 regions illustrate even cell distribution and comparable results between automated and manual passages.

Figure 3 plots cell counts and viability of CHO cells over six automated and manual passages, as measured on the Vi-CELL. The Biomek i7 Workstation was able to maintain the cells to comparable levels as the manual passaging results while maintaining cells above 90% viability. The average cell count across passages was slightly lower for automated passage, likely due to the inability to access a small portion of the well when tilted. Most significantly, the variability across passages is lower for the automated system than what was achieved manually (CV = 7.9% vs. 13.8% for cell counts), and this consistent treatment should aid assay consistency.

Figure 3. Automated cell maintenance. CHO cell counts (A) and viability (B) following 6 manual and automated passages, with comparable results between the two approaches. C) Averages and CVs across the six passages. Automated passaging resulted in lower variability in both metrics.

To demonstrate cellular assay plating, 1 X 106 cells were added to 100 mL media in a large reservoir during the culture process. The 1200 μL capacity Multichannel-96 head was used to mix the media to ensure even cell distribution throughout the reservoir. 1000 cells were then multidispensed into all quadrants of two 384-well plates in a single transfer step. 24 hours after plating, cell counts were measured in each well on the SpectraMax MiniMax. Figure 4A shows the heat maps of cell counts for each plate, showing that no bias was seen towards any portion of the plates. This was confirmed by CVs below 10% when comparing average cell counts across columns or rows for each plate (Figure 4B). In addition, the consistent plating from the multidispense step is demonstrated by CVs below 10% when comparing the average cell count for each of the 8 quadrants. This mix and multidispense was executed in under 2 minutes, thereby enabling high-throughput applications when compared to the repeated mixing and roughly 96 transfers it would take to execute this plating manually. 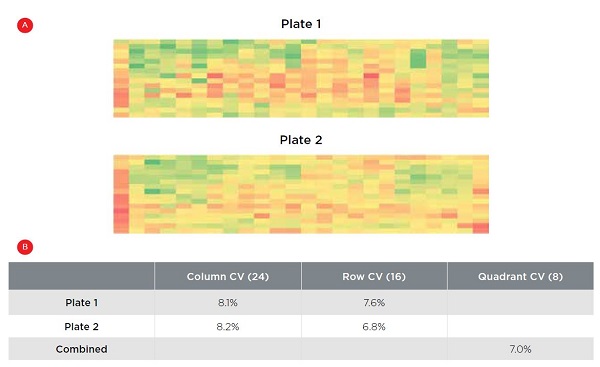 Figure 4. Automated cell plating. A) Heat maps of cell counts in each well of two 384-well plates showing even distribution across the plates. B) CVs of average cell counts across columns and rows for each plate and for the average across the 8 quadrants between the two plates illustrate thorough mixing of cells in the reservoir and consistent multidispensing respectively

Automation of this simple yet frequently burdensome process of passaging and plating cells demonstrates the power and flexibility of the Biomek i7 Workstation. The Span-8 pod enabled processing of low-density plates (i.e. 3 mL culture in 6-well plates) while the large capacity multichannel head enabled rapid plating of 768 assay wells. Integrated cellular analyzers gave the ability to utilize cell count data to drive the cell passaging process and image the passaged and plated cells without intervention, thereby reducing the likelihood of human error.

The suite of SAMI software can manage the processing of multiple plates through the integrated system and track where cells are within a multi-day or multi-week application. In addition, DART software acts as a data repository that stores data throughout a process or between processes and ensures that the data is easily accessible for additional analysis. By utilizing the Biomek i-Series instruments to automate workflows that are used frequently, the bench time saved by scientists accumulates quickly and these efforts can be redirected towards more valuable pursuits such as
experimental design and data interpretation.

Biomek Automated Workstations are not intended or validated for use in the diagnosis of disease or other conditions. Data shared in this document was obtained during development.