We mainly conduct fractionation based on density that uses the equilibrium density gradient ultracentrifugal isolation method. It is important to confirm equilibrium, and we are conducting simultaneous experiments in which one places the sample at the bottom, making it float up, and the other places the sample at the top to make it settle down. We judge that a sample has reached equilibrium if the markers that indicate the existence of exosomes (CD63, CD81) are in the fraction with the same density (Fig. 4). Density gradient often uses sucrose as the material, but we use OptiPrep (compound name iodixanol) (Fig. 5) because there have been many cases that reached equilibrium based on the above mentioned criteria when OptiPrep was used. Although sucrose often does not float up sufficiently and stalls midway when running the equilibrium density gradient ultracentrifugal isolation from the bottom, OptiPrep floats up to the appropriate spot and the location corresponds with the location of the sample placed at the top. 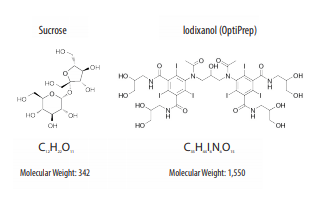 Fig. 6 indicates the protocol for the equilibrium density gradient ultracentrifugal isolation from saliva that we performed.3) In obtaining exosomes from saliva, it was not possible to directly adopt the protocol for cultured cells. If used without adjustments, the samples would not separate successfully in the density gradient stage. They would also stall midway even if we try to make them float up. We have also confirmed that the fraction that gets stuck shows a high degree of viscosity. For this reason, we treat saliva with ultrasound. Filtration also works, but considering the loss of samples, we have decided to use ultrasound.

After a crude centrifuge of saliva that was treated with ultrasound at 2,600 x g, the supernatant is ultracentrifuged under 160,000 x g for 70 minutes at 4°C on an Optima L-90K ultracentrifuge (Beckman Coulter) with swing rotor SW 32 Ti (38.5 mL Ultra-Clear tubes, #344058). The obtained pellet presents the exosome crude fraction (crude purified fraction, exosome + contaminants). We then suspend this pellet in buffer (47% iodixanol, 0.02 M HEPES/NaOH, pH 7.2) and placed it in the step density gradient buffer (47, 37, 28, 18% iodixanol, 0.02 M HEPES/ NaOH, pH 7.2). In this process we use 14 mL ultra-clear tubes (#344060, Beckman Coulter) and ultracentrifuge at 160,000 x g for 17 hours at 4°C using swing rotor SW 40 Ti. Density gradient may also be prepared using a continuous density gradient preparation device. When there are many samples, the experiment becomes easier when they are prepared in steps. Following centrifugation aliquot fractions from the top every 2.5 mL and confirm using nanoparticle tracking analysis (NTA), western blot and atomic force microscope (AFM).

The fractions obtained may be used in the next experiment as they are, or after running them on an ultracentrifuge, they may be re-suspended in PBS Details are presented later, but because most exosomes are lost when they go through washing, the sample moves straight to the proceeding analysis when miRNA etc. are analyzed. In analyzing NTA etc. as is, it is necessary to correct the viscosity, and because the process requires care, the samples are replaced with PBS before the analysis.

The biggest weakness of ultracentrifugation is the throughput. In order to improve the outcome, we have tried to run a density gradient centrifuge with an angle rotor (fixed-angle rotor). Regular swing rotors are able to centrifuge 4 or 6 tubes, and angle rotors are capable of centrifuging more. The tabletop Optima MAX-XP ultracentrifuge and TLA-110 angle rotor enable reductions in sample volume and time. Its protocol is represented in Fig. 7. The procedure is as previously outlined, but we were able to considerably reduce the centrifugation time, and the capacity increased from 6 to 8. We had been limited to one purification a day with the swing rotor but we could run two purifications a day with this. The level of purification is similar to that achieved with the swing rotor, and purification can be performed with no issues. 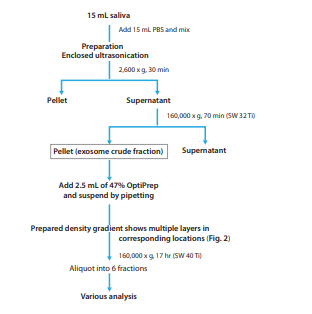 As a note of caution, there have been some reports that the results differ depending on slight differences in ultracentrifuge conditions. Accordingly, ISEV (International Society for Extracellular Vesicles) and others recommend stating not only the x g and the centrifugation time but also the type of rotor and the tubes used.

One group attempting to precipitate exosomes from breast milk is also creating its own protocol4), indicating a possible need to develop protocols tailored to each body fluid.

Finally, in conducting exosome research, it is essential to be cognizant of the fact that we are handling highly heterogeneous matter. In conducting basic research, it is necessary to use a purification method that does not miss anything. And this makes an ultracentrifuge the prime choice at this point in time.