Beckman.com is updating our online shopping experience. Some momentary delays can be expected on July 24th from 9 PM - 11 PM EST while these updates are being added. We appreciate your patience while we continue to improve the online experience at Beckman.com. 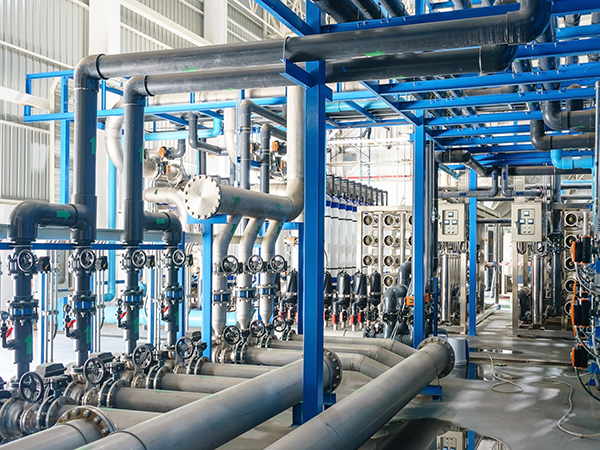 This standard applies to electrical conductivity, one of four critical water quality attributes defined by the United States Pharmacopeial Convention (USP) for purified water (PW) and water for injection (WFI).

Some gases—notably CO2—readily dissolve in water and interact to form ions, which predictably affect conductivity. Water conductivity is also affected by the presence of extraneous ions (e.g., chloride and ammonium ions), anions and cations, which influence the chemical purity and suitability of water for use in pharmaceutical applications.

Specifically, USP <645> provides guidance on measuring the conductivity of:

Electrical conductivity in water is a measure of the ion-facilitated electron flow through it. Water molecules dissociate into ions as a function of pH and temperature and result in a very predictable conductivity. Some gases, most notably carbon dioxide, readily dissolve in water and interact to form ions, which predictably affect conductivity also. For the purpose of this discussion, these ions and their resulting conductivity can be considered intrinsic to the water.

Water conductivity is also affected by the presence of extraneous ions. The extraneous ions used in modeling the conductivity specifications described below are the chloride and ammonia ions. The conductivity of the ubiquitous chloride ion (at the theoretical endpoint concentration of 0.47 ppm when chloride was a required attribute test in USP 22 and earlier revisions) and the ammonium ion (at the limit of 0.3 ppm) represents a major portion of the allowed water ionic impurity level. A balancing quantity of anions (such as chloride, to counter the ammonium ion) and cations (such as sodium, to counter the chloride ion) is included in this allowed impurity level to maintain electroneutrality. Extraneous ions such as these may have a significant effect on the water’s chemical purity and suitability for use in pharmaceutical applications.

The procedures below shall be performed using instrumentation that has been calibrated, has conductivity sensor cell constants that have been accurately determined, and has a temperature compensation function that has been disabled for Bulk Water Stage 1 testing. For both online and offline measurements, the suitability of instrumentation for quality control testing is also dependent on the sampling location(s) in the water system. The selected sampling instrument location(s) must reflect the quality of the water used.

Water conductivity must be measured accurately with calibrated instrumentation. An electrical conductivity measurement consists of the determination of the conductance, G (or its inverse, resistance, R), of the fluid between and around the electrodes.

It is the cell constant and the resistance measurement that must be verified and adjusted, if necessary.

Calibration (or verification) of the resistance measurement is accomplished by replacing the conductivity sensor electrodes with precision resistors having standards traceable to NIST or equivalent national authorities in other countries (accurate to ±0.1% of the stated value) to give a predicted instrument conductivity response.

The accuracy of the resistance measurement is acceptable if the measured conductivity with the traceable resistor is within ±0.1 μS/cm of the calculated value according to the equation above. For example, the traceable resistor is 50 kΩ, and the cell constant, Θ, is 0.10 cm–1. The calculated value is 2.0 × 10–6 S/cm or 2.0 μS/cm. The measured value should be 2.0 ± 0.1 μS/cm. The instrument must have a minimum resolution of 0.1 μS/cm on the lowest range.

The target conductivity value(s) should be based on the type of water to be analyzed, and it should be equal to or less than the water conductivity limit for that type of water. Multiple measuring circuits may be embedded in the meter or the sensor, and each circuit may require separate verification or calibration before use. The frequency of recalibration is a function of instrument system design.

The two non–temperature-compensated conductivity (or resistivity) values should be equivalent to or within ±5% of each other, or should have a difference that is acceptable on the basis of product water criticality and/or the water conductivity ranges in which the measurements are taken. The two conductivity sensors should be positioned close enough together to measure the same water sample at the same temperature and water quality.

Because temperature has a substantial effect on conductivity readings of specimens at high and low temperatures, many instruments automatically correct the actual reading to display the value that theoretically would be observed at the nominal temperature of 25°.

The procedure and test limits in this section are intended for Purified Water, Water for Injection, Water for Hemodialysis, the condensate of Pure Steam, and any other monographs that specify this section.

This is a three-stage test method to accommodate online or offline testing. Online conductivity testing provides real-time measurements and opportunities for real-time process control, decision, and intervention. Precautions should be taken while collecting water samples for offline conductivity measurements. The sample may be affected by the sampling method, the sampling container, and environmental factors such as ambient carbon dioxide concentration and organic vapors. This procedure can be started at Stage 2 if offline testing is preferred.

Stage 1 is intended for online measurement or may be performed offline in a suitable container.

(For atmosphere- and temperature-equilibrated samples only)

The specification provided represents the maximum allowable conductivity value, taking into consideration the limitation of the measurement method and reasonable container leaching. Such specification and the sampling volume choices should be defined and validated on the basis of the intended purpose of the water.

For containers with a nominal volume of 10 mL or less, if the conductivity is NMT 25 μS/cm, the water meets the requirements.

For containers with a nominal volume greater than 10 mL, if the conductivity is NMT 5 μS/cm, the water meets the requirements.